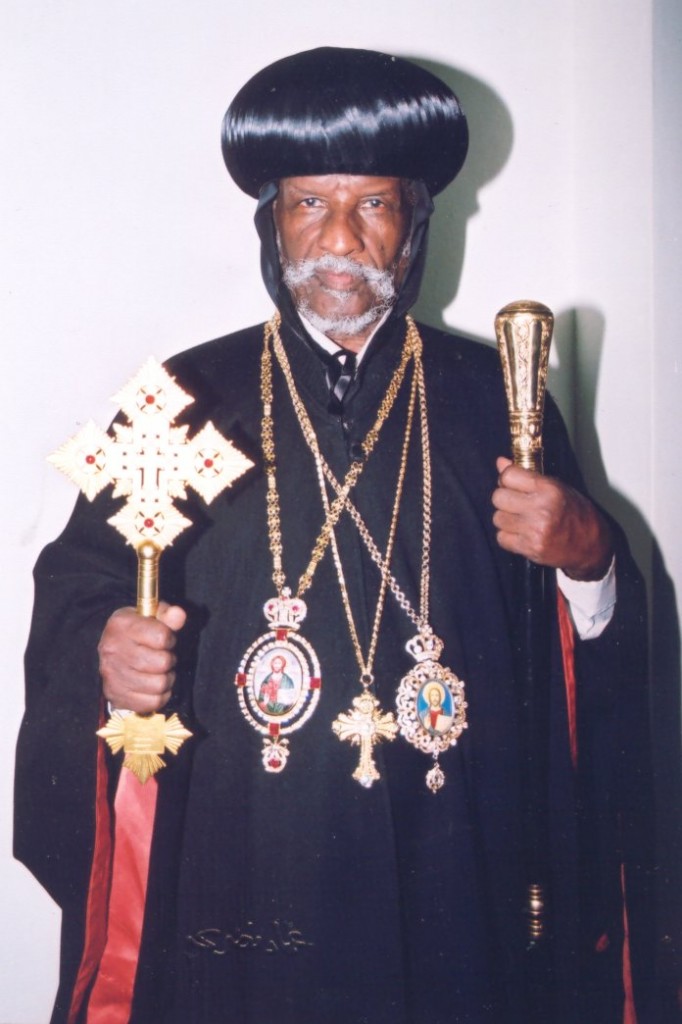 His Holiness Abune Antonious I, Patriarch of Asmara and all Eritrea

Intro: Monks and Abbots of monasteries in Eritrea excommunicated government agents who have been working to destabilize the Eritrean Orthodox Church for the past ten years. This action is a culmination of many months of meetings that the monks and prominent bishops have been holding inside Eritrea despite intimidations from the government. The statement released by the Abbots is an echo of the words of the imprisoned Patriarch Abune Antonios and the voices of many who are suffering for the faith. The government has put some bishops under house arrest in an effort to muffle their united cry for the government to stop meddling in church affairs.

Read the full statement of excommunication below.

Spiritual greetings to you,

It is common knowledge that for over ten years, you, the individuals known as Mr. Yoftahe Dimetros Gebre-mariam and the priest Habtom Russom, have been administrating the Orthodox Tewahdo Church of Eritrea.

It is a truth known to everyone that during your administration, the church that is ancient, Apostolic, Holy and a bastion of peace and unity has been turned into a place of bedlam; its vision distorted; its mission disrupted; and enveloped by a fog of divisiveness which has placed her at a great peril. This is due to your wicked actions which fell outside the parameters of the rule of law. Most of all, you’ve rendered a church that was a source of faith, good moral behavior; a teacher, guide and protector of law and order, and the book of God into a haven for hypocrites and self-serving beasts by destroying its pillars of law and sacraments. You’re the cause and effect of this saddening phenomenon that is exhausting the church and wrecking havoc on it; this is the truth we have been closely following and carefully weighing to determine its veracity. You’re therefore primarily responsible for all the Church’s problems that have gotten worse under your tenure as administrators.

In regard to this, we, the Union of Eritrean Monasteries, have advised and warned you repeatedly, directly and through the Holy Synod and other concerned parties, in writing and verbally, to take quick corrective decisions to nib the problems in the bud. In spite of this, you failed to awaken your conscience and correct the way you conducted and ran your affairs; but you also misconstrued our patience and foolishly led the Church from bad to worse; making her slide backwards like a crab. We’ve become keenly aware and certain that your labor and mission is not to promote the interests and growth of the Church, but to hasten its demise and disintegration so you can serve your own individual interests and gain fame.

Although it is very difficult to compile and list all the damage you’ve incurred and are incurring on the Holy Eritrean Orthodox Tewahdo Church, but in order to clarify all your misdeeds and transgressions with the hope that it might help you to repent, we’ve classified them into seven categories:

1.You’ve repeatedly violated and allowed the violation of the pillars of sacraments, canons and the traditions of the Church.

2.You’ve unlawfully taken over and monopolized the powers of the Holy Synod and the papacy of His Holiness the Patriarch, and the Archbishops of the Eritrean Orthodox Tewahdo Church; and in their name and without their consent you’ve taken illegal actions.

3.You’ve become partial and a cover to the hypocrites; and served them well by providing them solid ground.

4.You’ve strangled all aspects of the Church’s apostolic mission and spiritual activities and weakened the Church; labored to weaken and destroy the Union of Monasteries.

5.You’ve committed and allowed acts that brought in the causes for strife and dissension and put the unity of the Church in jeopardy;

6.You’ve being using your illegally acquired powers and dictatorial administrations to excommunicate and harass innocent servants of the Church, among whom were fathers from the monasteries and without any due process.

7.You’ve enabled corruptions and wickedness (contrary to spirituality) to spread within the Church.

In spite of your serious transgressions on the canons, religious traditions, the holy Church and sacredness, we’ve repeatedly reached out and implored you to correct your dictatorial wickedness, but you’ve failed to heed our advice. We, the Union of Monasteries, should not allow our limitless patience to be taken for granted; our Church be the play-ground of anyone who dares to come and highjack it as if it doesn’t have owners; we can’t tie our hands behind our backs and watch, for that will be an utter abdication of our most important spiritual obligations. We, therefore, excommunicate you, Mr. Yoftahe Dimetros Gebremariam, and the priest, Habtom Russom Habte, in the name of the Father, of the Son and of the Holy Spirit, by the authority of Peter and Paul, the three hundred eighteen fathers of the Orthodox faith, Timothy the Apostle, Abune Selema Kessate Birhan and all holy fathers of the monasteries of Eritrea, effective this hour.

On the basis of this, and from this day, October 01, 2014, forward, you, Mr. Yoftahe Dimetros Gebremariam and the priest, Habtom Russom Habte:

May the Holy God bless our Church and country!

Signed by the Abbots of the following six monasteries:

This Letter of Communication is copied to: