Bronx, NY – Last Sunday, April 26, 2015, the clergy and faithful of the Oriental and Eastern Orthodox churches of the Greater New York Area gathered together with H.E. Abune Zekarias, Archbishop of the Ethiopian Orthodox Tewahedo Church Archdiocese of New York, the Northeast, Southeast, and Central United States and his priests to commemorate the 30 Ethiopian and Eritrean Martyrs of Libya executed at the hands of the terrorist group Daesh.

The Standing Conference of Oriental Orthodox Churches condemns these brutal killings and declares that although the specific details of this repugnant atrocity are still emerging, and the names of most of these new martyrs for Christ remain unknown to the authorities of this world, we are sure that they are known to our merciful God for whom they willingly shed their blood and with whom they now rest in the Paradise of Joy. 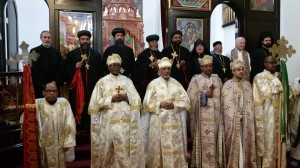