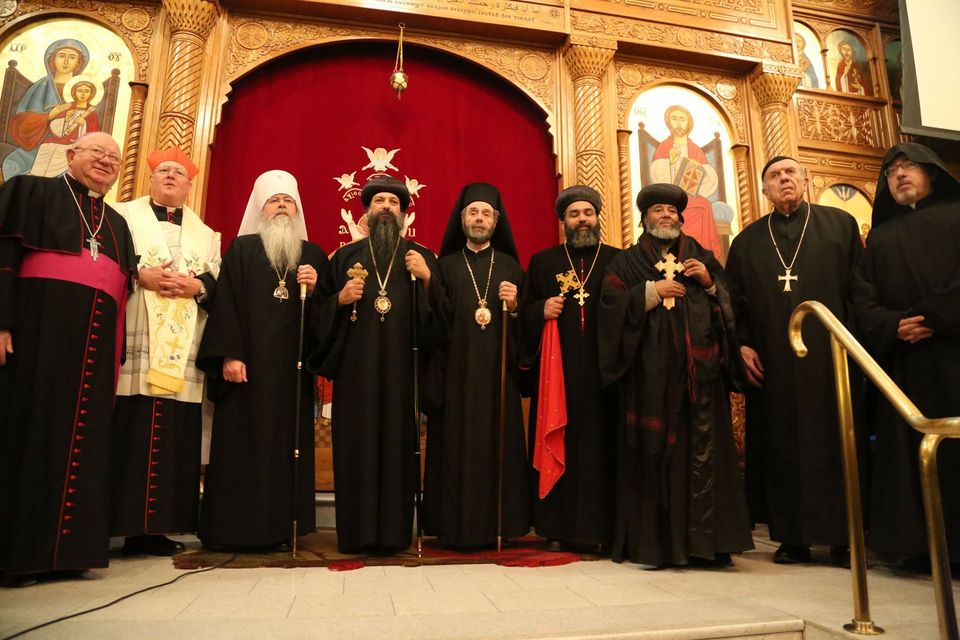 Staten Island, NY – H.G. Bishop David and the clergy and faithful of the Coptic Orthodox Diocese of New York & New England were joined last night – February 19, 2015 – by members of their Oriental Orthodox extended family as well as representatives of the Eastern Orthodox and Roman Catholic churches for a memorial prayer service commemorating the 21 Coptic Orthodox Christians martyred by terrorists in Libya.  The evening began at 7:00 PM with vespers in the Coptic rite, followed by messages of support and condolence from the fathers of the Oriental Orthodox Church family and the hierarchs of the Eastern Orthodox and Roman Catholic churches.

A mood of sorrowful joy permeated the church like so much incense as mournful melismatic hymns wafted through the sanctuary interspersed with messages from the fathers which acknowledged the pain felt by the families of the martyrs while simultaneously declaring defiantly that the slain had achieved an everlasting victory in Christ.  The overall message was one of the solidarity of all Apostolic Christians in the face of persecution and the willingness of the faithful to shed their blood for Christ.  H.E. Abune Zekarias of the Ethiopian Orthodox Tewahedo Church reaffirmed the ancient ties which bind the Coptic and Ethiopian churches declaring, “We are the same.  The Ethiopian Orthodox Church and the Coptic Church have always been together.  By canon law and faith we are together…Bishop David, I stand alongside you and your holy congregation…may the blessing and the grace of those martyrs who were killed for the name of Our Lord Jesus Christ be with us”.

H.E. Mor Silvanos Ayub of the Knanaya Syriac Church reminded the assembly that the intended effect of the video envisaged by its authors was utterly defeated by the steadfast witness of the martyrs: “A martyr is one who dies for the Christian faith and for the Church.  The video of their beheading shows that in the moment of their barbaric execution [the 21 Coptic martyrs] upheld their faith until the very last moment”.

Speaking on behalf of the Syriac Orthodox Church, V. Rev. Fr. John Khoury, Patriarchal Vicar of H.H. Moran Mor Ignatius Aphrem II Karim chided Western governments for failing to take action to halt the massacres in the Middle East and quoted Dostoevsky as saying, “The Western World has lost its hold onto Christ and because of this and only this the Western World should perish”.  Like the other Oriental Orthodox fathers, Fr. John also spoke to the unity of our communion, declaring, “We Syriac and Coptic Orthodox Churches stand united in our indisputable resolve and faith in Our Lord Jesus Christ and His resurrection”.

Fr. Simeon Odabashian, Diocesan Vicar of H.E. Archbishop Khajag Barsamian of the Eastern Diocese of the Armenian Church summed the message of the Oriental Orthodox fathers up nicely, “The greatest comfort comes from our Holy Apostolic Faith…the martyrs are with God, they are with the angels…what we need to be doing is praying for the perpetrators…We Oriental Orthodox Churches are coming closer and closer together each day, and as we can share in the witness of our martyrs we will become even more strengthened by the truth of the Resurrection of Our Lord Jesus Christ.  May the Lord enlighten the souls of the new 21 Martyrs and may the Holy Spirit be a comfort to their immediate families and to all of you, the family of the Coptic Orthodox Church”.

Closing the meeting with an impassioned speech replete with Patristic references pertaining to the glory and desirability of martyrdom for the sincere Christian, H.G. Bishop David declared, “Let the martyrdom of these 21 men be a call to up to action on the part of the global community and its civil and religious leaders…this is the time for action on the part of the United Nations.  It is a time for leadership by the United States and other nations who have the ability to defeat this threat but must marshal the will..the blood of these men call out for justice…We do not call upon our leaders to act because we fear persecution.  Indeed, Our Lord Jesus Christ instructs us that we would be persecuted for His name’s sake.  And we do not seek to avoid the great blessing of martyrdom.  As St. Justin Martyr writes: ‘For if we looked for a human kingdom, we would deny our Christ, so that we might not be killed. We would try to escape detection, so that we might obtain what we hope for. But since our thoughts are not fixed on the present, we are not concerned when men cut us off; since death is a debt which must at all events be paid.’  However, as Christians we must stand up for peace and for the fundamental principle that any religion must start from a premise of sanctity of life, freedom of choice, and human dignity…We declare as the Nation of the Cross that the Cross will remain our pride, our hope in all times, and our comfort, and our greatest source of strength, for, as St. Paul says, the message of the Cross is foolishness to those who are perishing, but to us who are being saved it is the power of God.  Maranatha. The Lord is coming”.

v  H.G. Bishop David of the Coptic Orthodox Diocese of New York & New England and his priests, deacons, and faithful

v  H.B. Metropolitan Tikhon and a delegation of priests and deacons of the Orthodox Church in America

v  H.G. Bishop Sevastianos of Zeila, Chief-Secretary of the Holy Eparchial Synod of the Greek Orthodox Archdiocese of America representing H.E. Archbishop Demetrios, the Exarch of the Ecumenical Patriarchate

A video of the memorial service can be viewed at the following link: https://www.youtube.com/watch?v=ANJtbnwMKqo