Orthodox Prayer Services for the Persecuted Christians of Egypt & Syria

New York, NY – For the indigenous Christians of the Middle East and North Africa, persecution is, unfortunately, nothing new.  Nevertheless, the recent waves of violence directed against the Christian populations of Egypt and Syria have been especially disturbing, characterized by extreme and naked brutality and sickening, unspeakable acts of cruelty.  Every day, the litany of the martyred innocents grows and grows:

The list goes on and on.  “What pains us further,” reads a statement prepared by the five Coptic Orthodox bishops serving in North America, “is the misinformation which has brought us to this moment, and which continues to circulate in the media and for many political leaders”.  Indeed, if one were to evaluate the present situations in Syria and Egypt based solely on Western media coverage, and the statements of American politicians of both major parties, one would have to conclude that the anti-Assad forces were heroic freedom fighters to be armed and supported and that the Muslim Brotherhood were the innocent victims of tyrannical government oppression.  In point of fact, however, Islamist “insurgents” in Syria are in the process of “cleansing” the nation of its Christians, while the Muslim Brotherhood, ousted at the will of the majority of the Egyptian people by the hand of a dutiful and heroic military, has turned to venting its fury on the innocent Copts, murdering Christians in the streets and destroying more than seventy churches, a number which grows almost daily. 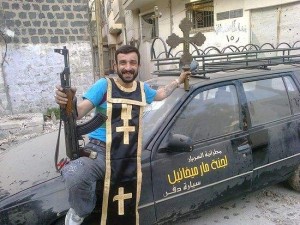 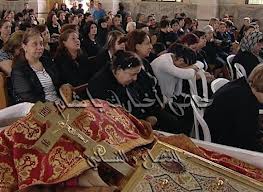 The prayer service was made possible at its desirable midtown location by the good graces and generosity of the Diocese of the Armenian Church of America (Eastern) and its Primate, SCOOCH member H.E. Archbishop Khajag Barsamian.  Archbishop Khajag could not be present himself due to a previous commitment in Boston, but was well-represented by the V. Rev. Fr. Mamigon Kiledjian, Dean of St. Vartan Cathedral.

Even before the prayer service had commenced at 3:00 pm on Tuesday, August 20, 2013, Fr. Mamigon made the Coptic Christians filing into St. Vartan’s sanctuary feel at home.  “Is this your church?” inquired one elderly Coptic woman, stooping to kiss Fr. Mamigon’s hand and receive his blessing.  “No,” Fr. Mamigon replied with a warm and broad smile, gently clasping her hand, “This is your church.  I am the priest here, but this is your church.”  The service itself was somber, but hopeful, with prayers offered in remembrance of the departed and for the safety and succor of the living.  After the prayers, the assembled congregation joined the hierarchs in the church’s main hall where they heard a prepared statement read by H.G. Anba Serapion on behalf of the Coptic hierarchs serving in North America, speeches by special guests Dr. James J. Zogby, Director of Zogby Research Services and President of the Arab American Institute and Dr. Hossam Abdel-Maksoud, Chairman of the Egyptian American Community Foundation, as well as encouraging homilies by H.E. Mor Cyril and H.G. Anba David. 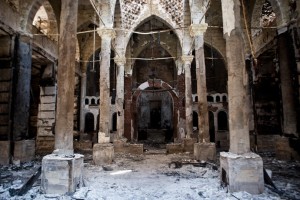 Anba David noted the close bond between the Syriac and Coptic peoples and churches as established in the prophecies of Isaiah and maintained throughout history, a shared history of common Faith, common suffering, common persecution, and common hope in Christ.  “Blessed be Egypt my people and Assyria the work of my hands” (Isaiah 19:25).  His Grace also enumerated the reasons that today’s gathering was necessary despite the fact that as Christians we regard persecution for Christ’s sake to be a tremendous blessing, not the least among them to tell the world the truth.  H.E. Mor Cyril encouraged the faithful to pray not only for the victims, but also for their attackers, and also suggested that Orthodox Christians write to their representatives in government and tell them the truth about the situation in their homelands.  Dr. Zogby suggested that a coalition of Middle Eastern Christian leaders in the USA meet as a group with President Obama and make their voices heard.

The day’s events were over by 5:00 pm, and many of the participants then traveled to Little Falls, NJ to another service beginning at 7:00 pm: prayers offered to God for the safe return of the kidnapped bishops Metropolitan Yohanna Ibrahim and Metropolitan Paul Yazigi of Syria, held by Islamic militants in unknown conditions since April.

The Standing Conference of Oriental Orthodox Churches prays for the cessation of violence in Egypt and Syria and the return of stability to the region.

The official statement prepared by the Coptic Orthodox hierarchs of North America can be downloaded from this page as a PDF.  Official Statement By NA Bishops