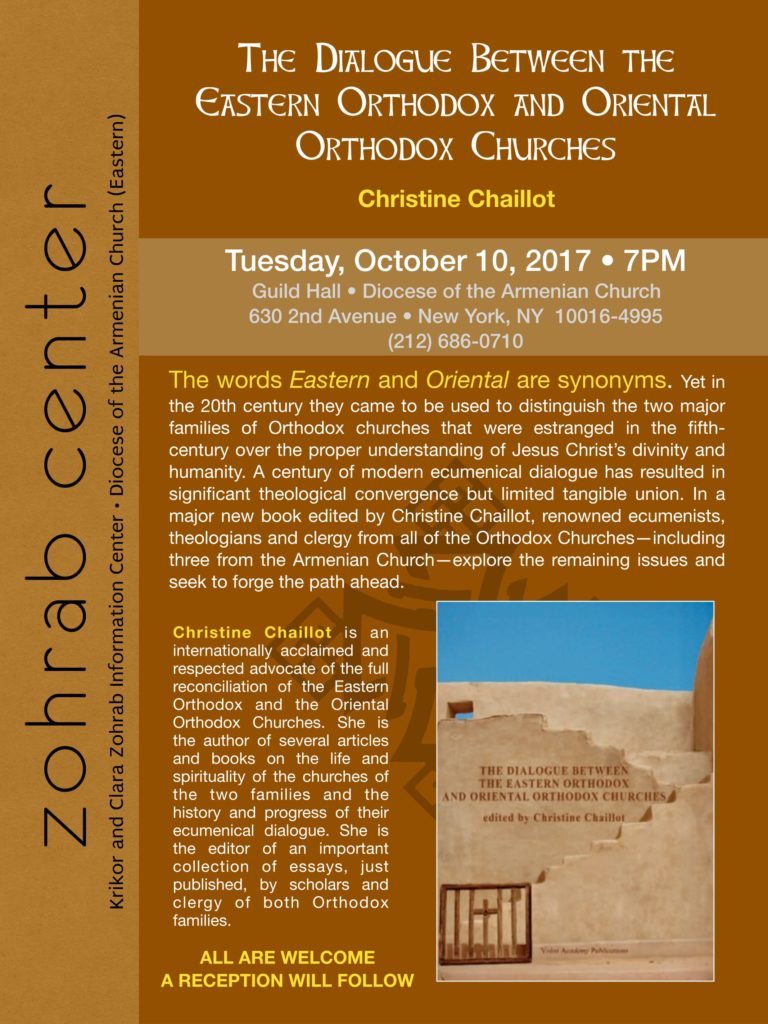 The words Eastern and Oriental are synonyms. Yet in the 20th century these two words came to be be used to distinguish the two major families of Orthodox churches that were estranged in the fifth century over the dilemma of how properly to understand Jesus’ divinity and his humanity.

The Zohrab Center will inaugurate its Fall 2017 season of evening enrichment events on Tuesday, October 10, 2017 with a book presentation by the internationally acclaimed Orthodox ecumenist and author, Christine Chaillot.

Madame Chaillot will present a major new book, edited by her, which brings together essays by over 50 renowned ecumenists, theologians, and clergy representing all of the Orthodox Churches. The book represents the most important new step in the reconciliation of these ancient eastern churches.

The massive new book, entitled, The Dialogue Between the Eastern Orthodox and Oriental Orthodox Churches, includes important essays by His Holiness Aram I, Catholicos of the Great House of Cilicia; V. Rev. Fr. Daniel Findikyan, Director of the Zohrab Information Center, and V. Rev. Fr. Shahé Aramian, of the Holy See of Etchmiadzin.

The talk and book presentation will take place in the Guild Hall of the Armenian Diocese, 630 2nd Avenue, New York, NY beginning at 7PM. All are welcome to the free event, which will conclude with a reception.

Christine Chaillot is Swiss (Geneva) and Eastern Orthodox (Patriarchate of Constantinople). She is internationally known and respected for her ardent advocacy of the full reconciliation of the Eastern Orthodox and the Oriental Orthodox Churches. Mme. Chaillot is the author of numerous books and articles on the life and spirituality of the churches of the two families and the history and progress of their ecumenical dialogue. A frequent visitor to Armenia, Ethiopia, and all of the lands of historic Orthodoxy, she is not only a friend to hierarchs and theologians of every Orthodox church, but a personal catalyst for deeper relationships and dialogue among them.