The conference of the Heads of oriental Orthodox Churches, which was held in Addis Ababa, Ethiopia, during January 1965, is undoubtedly an event of some importance in the history of the church in our times. For the first time in history is brought together in a formal meeting the Heads of five of the historic Churches. Accompanied by a few delegates each, they came together and thereby inaugurated a new era of cooperation and communication among their Churches. Although these five Churches have all along recognized one another officially as sister churches holding full Eucharistic fellowship with each other, they have not had a common council or synod after the fifth century. The Addis Ababa Conference has now brought to an end this practical isolation one from another of these Churches and opened up a new age in which they may be expected both to manifest concretely their unity and to play their role together in serving the Christian cause in the modern world.

The heads of the Oriental Churches at the Conference.

It is with this goal in mind that their Holiness’s the patriarchs have, through the conference, adopted the decisions which are published in the present volume. In fact they have sanctioned the appointment of various committees, which in the light of adequate study and comprehensive vision will draw the attention of the Churches to the many tasks which they have to fulfill. Existing as it does in an age of science, the church should be able to combine with its spiritual purity the many insights which science offers. From this point of view, the plan of creating a centre for evangelistic studies and an institution for higher theological learning is to be heartily welcomed.

The conference of the Heads of churches which took only a week was preceded by another week of preparatory work by specially delegated theologians. The task of organizing them both needed several months of planning. In fact, the very idea of the conference reached its maturity after several years of contemplation. Behind all this there was his Imperial Majesty Haile Selassie I, Emperor of Ethiopia, who convened the conference, there by giving it a setting similar to that of the Councils of the ancient Church. So it was quite fitting that the conference conferred on the Emperor the little, “Defender of Faith”. 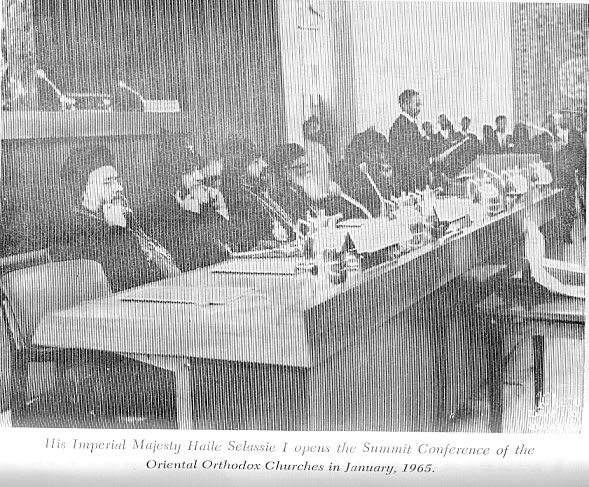 This Conference is only a beginning – just a humble one at that – towards leading the Church concerned to realize and fulfill their God-given mission in the world. But we have firm hope in the power of God who will continue the work thus begun, so that it may bear fruit to his glory. We believe that our Lord Jesus Christ who sumptuously fed five thousand men with the negligible provision of five loaves and two fishes will lead the churches in this great work.

In this connection, a special word of appreciation is due to the diplomatic missions of the Government of Ethiopia for their commendable service in communicating most promptly all the necessary messages relating to the Conference to the various Churches. While extending to the members of the various committees, the interim Secretary, and his assistants, the sincere appreciation and thanks of the secretariat, of the conference, may I express my profound joy to see that this document is being published, and that its copies will be placed in the hands of all those who love the church.