The words Eastern and Oriental are synonyms. Yet in the 20th century these two words came to be be used to distinguish the two major families of Orthodox churches that were estranged in the fifth century over the dilemma of how properly to understand Jesus’ divinity and his humanity. The Zohrab Center will inaugurate […] 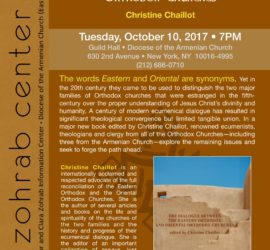