New York, NY – The fathers of the Standing Conference of Oriental Orthodox Churches were blessed by the presence of His Holiness Moran Mor Ignatius Aphrem II at their meeting this past Monday, March 16, 2015, at the headquarters of the Eastern Diocese of the Armenian Apostolic Church in Manhattan.  His Holiness affirmed his commitment to the Standing Conference, stating that he has been a proud member of SCOOCH since 1996 and has every intention of remaining an active member of the organization.  His Holiness informed the fathers of SCOOCH that the Patriarchate of Antioch would be maintaining regional offices in the United States and Europe, and that even when a Syriac Orthodox bishop was appointed to oversee the Archdiocese here on the East Coast of the United States, His Holiness would, along with that bishop, continue to remain a driving force in SCOOCH. 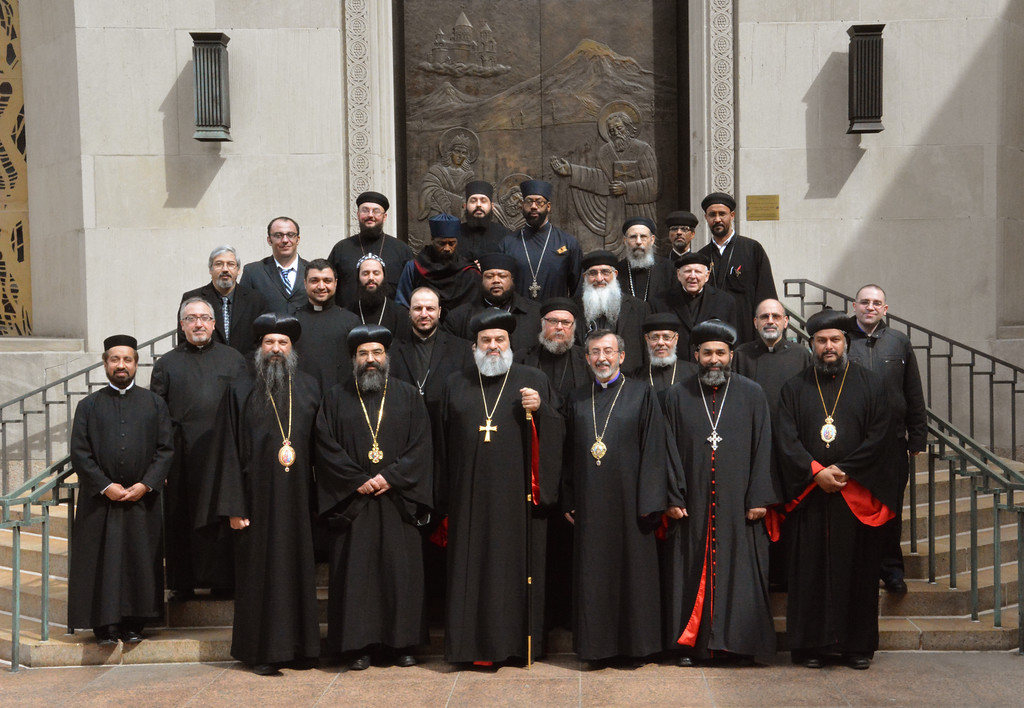 His Holiness also noted that on April 23, 2015 all of the Patriarchs of the Oriental Orthodox Communion would be gathered in Holy Etchmiadzin for the Canonization of the Martyrs of the Armenian Genocide.  His Holiness observed that this would be an excellent opportunity to plan the first general meeting of the heads of the Oriental Orthodox Churches since the Addis Ababa Conference of 1965 and that he plans to take advantage of this opportunity to discuss the idea with his peers.  The delegates expressed joy and excitement at this notion.

The fathers of the Conference also resolved to move forward with Orthodox Christian Campus Ministries (OCCM – http://occministries.org/), the official college campus ministry of SCOOCH, with a stated goal of uniting all of the existing Oriental Orthodox campus ministries under one banner and creating new campus ministries where none have previously existed.  A letter will soon be disseminated by the hierarchs to their priests and campus ministers furthering this aim.

Several Concelebrations of the Divine Liturgy were also announced.  The hierarchs of SCOOCH – with the presence of His Holiness – will celebrate in the Syriac Rite at a yet to be determined Syriac parish in New Jersey on October 24, 2015, while regional concelebrations are planned for Cleveland on April 25, 2015 (at St. Mark’s Coptic Orthodox Church, 2100 E Pleasant Valley Rd, Seven Hills, OH 44131) and Philadelphia on October 3, 2015 (at Holy Trinity Armenian Apostolic Church, 101 Ashmead Rd, Cheltenham, PA 19012).  The Annual Oriental Orthodox Youth Conference is also tentatively slated for September 19, 2015 (at St. Leon’s Armenian Apostolic Church, 12-61 Saddle River Rd, Fair Lawn, NJ 07410).  The Orthodox faithful and others interested should watch this website for details and save the dates!  Other topics discussed included the charitable work of the SCOOCH NGO the League of Oriental Orthodox Churches (http://www.tlooc.org), relations with the Eastern Orthodox and Roman Catholic Churches, and the ongoing crises faced by the Church in Iraq, Syria, and Eritrea.