Matthew Galey, a deacon from St. Anthony Coptic Orthodox Church, described the event as follows: “To be surrounded in such an atmosphere, I expected to be a foreigner and stranger in the different cultural surroundings; but instead I found myself to be home in our heaven-on-earth, surrounded by brothers and sisters in Christ”.  Other youth described the event in equally glowing terms: “Attending the Philadelphia Concelebrated Liturgy was like experiencing the glory and majesty of the Early Church breaking through into the present” and “Praying in the Syrian rite was like being in Heaven”.

The Liturgy was followed by a youth conference, featuring a keynote speech on the topic of Repentance and Confession in the Parable of the Prodigal Son by V. Rev. Fr. Melake Ganet Tesfa Eyesus and a memorial service for the recently departed Patriarch of Antioch and all the East, H.H. Moran Mor Ignatius Zakka I Iwas of thrice-blessed memory.  The latter event was attended by Philadelphian clergy of a variety of confessions who came to pay their respects to the much-beloved and world-renowned Mor Ignatius Zakka.  After a brief respite, the Orthodox clergy and faithful later reconvened to celebrate a Lenten vespers service. 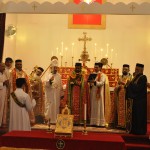