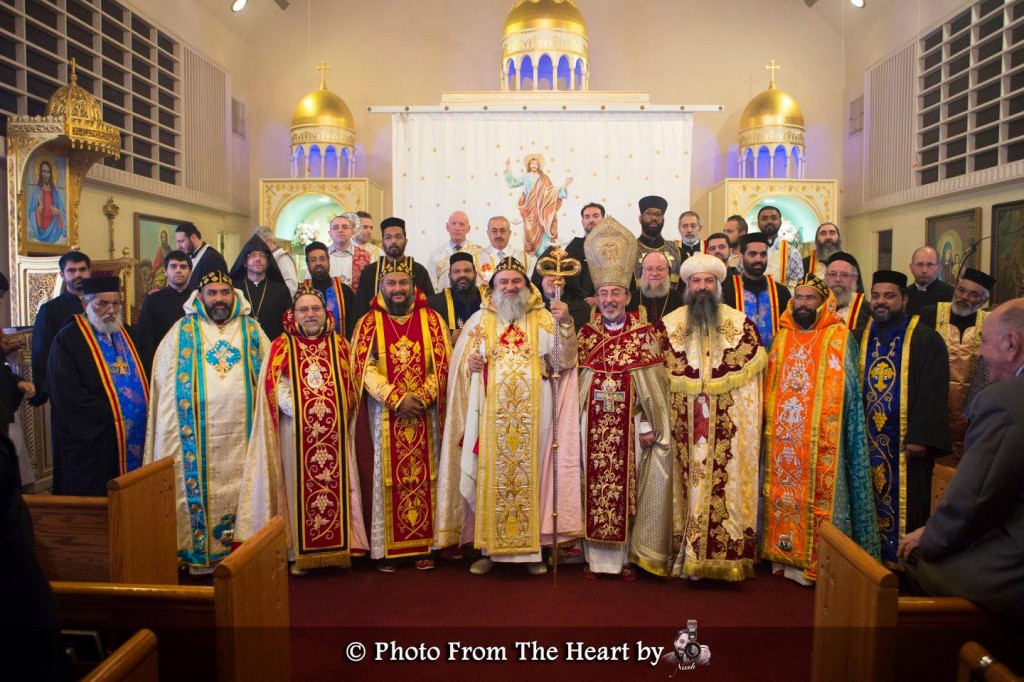 God has certainly chosen the right man to head the Syriac Orthodox Church during this trying time in her history.  Since his enthronement on May 29, 2014, His Holiness Mor Aphrem has been tending to the spiritual and material needs of his imperiled flock, visiting them in the most dangerous parts of Iraq and Syria on numerous occasions, including in recent months.  Additionally, His Holiness has been traveling all over Europe and North America advocating not only for the Syriac Orthodox Church, but for all of the beleaguered Christians of the Middle East.  Most recently, he attended the International Peace Conference in Tirana, Albania and met with the Prime Minister of Canada, Stephen Harper, in Toronto.  Additionally, His Holiness has been working tirelessly to heal the painful divisions within the Syriac Orthodox Church, reconciling estranged elements in North America and Europe to the Mother Church and making well-received conciliatory overtures to the Malankara Orthodox Syrian Church in India.  Further, His Holiness has been seeing to the growth and theological education of his flock, consecrating numerous churches and inaugurating the new Syriac Theological Seminary in Vienna, Austria.  In addition, His Holiness has found time to continue with the evangelistic mission of the Church, working to spread the Orthodox Faith with those serving in the mission field in Central America and other parts of the world.  Finally, His Holiness has been active within the Oriental Orthodox community, maintaining his position as Co-Chairman of SCOOCH (along with H.E. Archbishop Khajag Barsamian of the Armenian Church), despite his duties as Patriarch.  His Holiness regularly travels to North America to attend SCOOCH meetings and concelebrate the Liturgy with his fellow hierarchs.  He also promotes Oriental Orthodox unity at the highest possible level, recently advocating – during an unofficial meeting of the Oriental Orthodox Patriarchs at the canonization ceremony for the martyrs of the Armenian Genocide – for the first official meeting of the Heads of the Oriental Orthodox Churches since the Addis Ababa Conference of 1965.  The fathers and faithful gathered at Archangel Michael & St. Mina Church expressed their genuine love and gratitude to His Holiness for all he has done so far for the One, Holy, Catholic, and Apostolic Church.

The next morning, on Saturday, October 24, 2015, H.H. Mor Ignatius Aphrem led the faithful of the Oriental Orthodox Churches of the Greater New York area in a thoroughly moving Concelebration of the Divine Liturgy at St. Marks Syriac Orthodox Cathedral in Teaneck, NJ.  The Liturgy was convened not only as an expression of the unity of the Oriental Orthodox Churches at the Chalice and in commemoration of the hundredth anniversary of the Sayfo and the Medz Yeghern, but also in acknowledgment of the present genocide being carried out by the forces of evil against the indigenous Christians of the Middle East.  SCOOCH members H.E. Mor Dionysius Jean Kawak, H.E. Mor Titus Yeldho, H.E. Mor Silvanos Ayub, H.G. Bishop David, H.E. Archbishop Khajag Barsamian, and the visiting bishop of Kozhikode, H.E. Mor Irenius Paulose joined His Holiness at the altar, along with several dozen deacons and priests.  His Holiness preached a moving homily, reminding the faithful that as Christians, we are supposed to expect persecution, for, “If they have called the master of the house Beelzebub, how much more shall they call them of his household?” (St. Matthew 10:25).  “The duty of the Christian”, His Holiness reminded those in attendance, “is to transform the world around him, making it as much as possible an icon of Heaven.  Of course, the world resists this change, and that is why the Christian is persecuted”.  His Holiness also reminded the faithful that the continued persecution of the Oriental Orthodox Church since the first century is demonstrative of the fact that the Oriental Orthodox Church is the Church established by Christ, and as such, the Church must remain faithful and its members must draw continually closer to one another in love and unity.  Finally, His Holiness noted that it is not enough that we celebrate our shared Orthodox Faith together, or even simply to endure as the Church until Our Lord should come again, but we must also carry out Our Lord Jesus Christ’s Great Commission and spread our Faith to the wider world.

The Standing Conference of Oriental Orthodox Churches prays that God may keep His Holiness Mor Ignatius Aphrem II safe in all of his travels and on his Holy Throne for many years.