Orange, NJ – The annual feast day celebrating a church’s patron saint is a major event in the life of any Orthodox Christian parish, as is the elevation of any church to the level of cathedral, but in recent years such occasions – often, in former times, celebrated in relative isolation and limited to a single ethno-religious community – have taken on an added dimension: they have become expressions of the full spiritual, theological, and sacramental unity of the Oriental Orthodox Communion.  This is, in large part, the fruit of the Standing Conference of Oriental Orthodox Churches’ directive, promulgated on November 1, 2009, to “invite [members] of nearby sister churches to participate in celebrations and liturgical services that are unique to your own tradition (for example, the commemoration of a patron saint, a national feast day or other holy day)”. 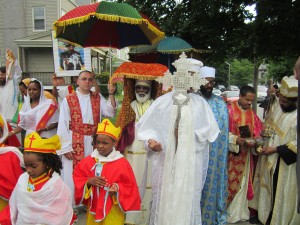 Earlier in the year, on Saturday April 20, 2013, the clergy of Debre Ganet Kidus Gabriel had themselves participated in the Proclamation of St. Peter’s Malankara-Syriac Orthodox Church of Philadelphia, PA to be a cathedral, an event presided over by the Standing Conference of Oriental Orthodox Churches’ own H.E. Mor Titus Yeldho and H.E. Mor Cyril Aphrem Karim along with H.E. Mor Severios Abraham the Assistant Metropolitan of Ankamali Diocese and Abbott of Mor Gabriel Dayaro Monastery, Mor Dioscorus Kuriakose Metropolitan of the Simhasana Churches in Malecuriz and its Environs, and H.E. Mor Silvanos Ayub of the Knanaya Malankara-Syriac Archdiocese.  Also present at the ceremony were V. Rev. Fr. Oshagan Gulgulian of St. Sahag and St. Mesrob Armenian Apostolic Church and clergy from local Syriac and Malankara-Syriac congregations. 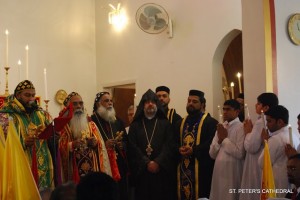 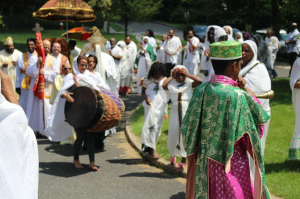 The true love, unity and brotherhood in Christ of the Oriental Orthodox Churches were more than evident at each of these events, which were far more than formalities.  In each case, the solemn, sacred ceremonies of each ancient tradition – which, in accordance with the full unity of the Oriental Orthodox Churches featured full participation from each of the visiting priests and deacons regardless of rite or jurisdiction – was followed by agape meals in the truest sense of the word, replete with laughter, happiness, networking, and an abundance of delicious ethnic cuisine.

The Standing Conference of Oriental Orthodox Churches rejoices that far from a mere symbolic unity, true lasting and personal bonds of friendship and communion have been established between their clergy and congregations, who regard one another more as long lost and rediscovered family than as strangers to be greeted with polite yet distant formality.  With God’s help, these bonds will continue to grow, flourish and be strengthened in keeping with Our Lord Jesus Christ’s commandment, “that they may be one” (St. John 17:21) and the unity in diversity of the Oriental Orthodox Church will continue to serve as an icon and model for the world.