Pastoral Care: Our Unity between Clergy and Laity

Englewood, NJ – “By our ministry,” the V. Rev. Fr. Melake Ganet Tesfa Eyesus declared to an enraptured audience, “the faithful are brought to Holy Baptism; by our prayers they are blessed; by the imposition of our hands they receive from God the Holy Spirit, and they enter the Kingdom of Grace…as much as possible, the priest ought to reach out to each member of his flock individually, to edify them in private, and by familiar exhortation, strive to produce fruit in the hearts of his people”. 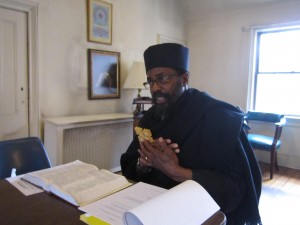 With these words, the pastor of Debre Ganet Kidus Gabriel Ethiopian Orthodox Tewahedo Church in Orange, NJ, eloquently summarized the theme of Pastoral Care: Our Unity Between Clergy and Laity, a spiritual retreat convened during the recent Great and Holy Fast designed to minister to the specific needs of Western born, primarily English-speaking Orthodox Christians.  Attendees of the conference were largely drawn from the faithful of four area Ethiopian Orthodox churches:

Thirsty for an authentically Orthodox model of mission and ministry to Orthodox Christians raised in the West, however, members of local Coptic and Malankara-Syriac churches also attended the one-day retreat, convened on Saturday, March 28, 2015 from 9:00 AM – 5:00 PM under the auspices of H.E. Abune Zekarias of the Ethiopian Orthodox Archdiocese of New York, where they too benefited greatly from the hands-on pastoral care lovingly meted out like so much manna by the Ethiopian fathers.

Rightly identifying a specific need for English-language ministry to Western Born Orthodox Christians – whether they are second-generation immigrants from traditionally Orthodox nations or converts from the population at large – delivered according to an Orthodox model and in accordance with an Orthodox ethos and phronema, each of the fathers tackled a specific aspect of the topic of pastoral care in a number of rotating breakout sessions: 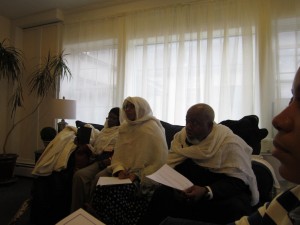 The Ethiopian Orthodox fathers organized their conference along lines which should be emulated by any Orthodox clergyman or lay servant interested in ministry and mission in the West, eschewing both exclusive ethnocentrism and the adoption of Evangelical Protestant missionary models in favor of a wholly Orthodox approach. More than 50 years ago, Fr. Alexander Schmemann of Thrice-Blessed Memory observed in his article Problems of Orthodoxy in America: II. The Liturgical Problem, that in the main there are two camps in the Orthodox Church:

The same is largely true today, but there is a third camp; small, but dedicated and growing: those on the narrow path who seek the genuine integration of Orthodoxy into the culture of the land in which they live without compromise in Orthodoxy or orthopraxis.  While this group is not generally interested in using the Church as a vehicle for the maintenance of any particular culture, they recognize the fact that the Orthodox Church regards itself as being the Church in the most exclusive sense of the term possible and that the adoption of heteropraxis means the de facto adoption of the heterodoxy which informs it and of which it is a natural outgrowth.  Glory be to God, the fathers of the Ethiopian Church who convened this conference fall decidedly into the third camp.

As H.H. Mor Ignatius Aphrem II remarked at a recent meeting of the Standing Conference of Oriental Orthodox Churches, the Ethiopian Orthodox mission in North America and the West Indies stands as a model to be emulated by all Orthodox churches. May God give the fathers of this venerable church to – as Fr. Tesfa Eyesus declared – “produce fruit in the hearts of His people”, and may their authentically Orthodox model of mission and ministry spread throughout the West.

The fathers of the New York area Ethiopian churches plan to make their Lenten retreat an annual occurrence.  Watch the SCOOCH website for more information if you’re interested in taking the blessing of attending.