PAMPAKUDA KERALA, INDIA – Yesterday, Tuesday, January 28, 2014, the Oriental Orthodox Churches and the Roman Catholic Church initiated a week-long dialogue at the international level in the South Indian village of Pampakuda (not far from Kottayam).

A total of thirty-five delegates (including ten observers) representing the two communions will participate in a the dialogue, holding forth on topics such as communion, concepts of ecclesiology, the role of the episcopacy in the church, the importance of Apostolic succession, the role and meaning of Ecumenical Councils, and the mission of the Church in the modern world.  The theme of the conference is the nature and concept of communion as it existed in the undivided Church of the fifth century prior to the Chalcedonian schism.

Previous conferences in the ongoing dialogue were held in Rome last year and Addis Ababa in 2012.

The conference will conclude on Sunday, February 2, 2014. 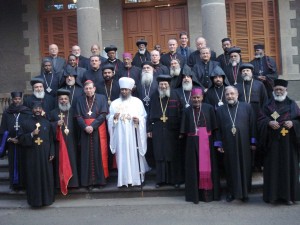